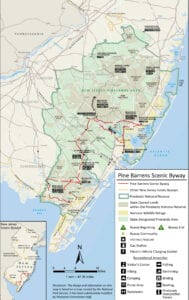 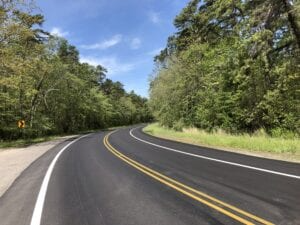 The state-designated Pine Barrens Scenic Byway that meanders through six southern counties has now been designated as a National Scenic Byway, through the U.S. Department of Transportation.

The New Jersey Pinelands Commission is overseeing the administration of the 130-mile byway route, and it prepared the successful application to obtain the National Scenic Byway designation in June 2020. 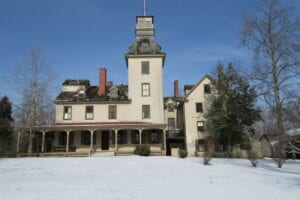 HISTORY TRAIL: Batsto State Park is a mansion and reconstructed iron town from Revolutionary times that manufactured iron cannonballs and household items that were prohibited by the British – the colonies were expected to import such items from Great Britain. The site tells the story of the iron forges that made iron from naturally occurring bog iron in the pines. (Photo by Pat Johnson)

Some of the points of interest along the scenic byway are the Tuckerton Seaport; Bass River State Forest; Port Republic, once the headquarters  of the Revolutionary War privateers; Batsto Village, an iron forge town; Hammonton’s blueberry fields and much more.

“We are thrilled to learn of this designation, which will place a spotlight on the byway and the beauty of the Pinelands,” said Nancy Wittenberg, executive director of the Pinelands Commission. “The National Scenic Byway Designation bestows prestige and national and international recognition to the area, and it enhances efforts to preserve the Pinelands by increasing awareness and encouraging the stewardship of the region’s resources. The national designation could also provide an economic boost to local Pinelands communities through increased tourism and federal funding for projects that promote the Byway.”

A total of 63 nomination applications were submitted to the Federal Highways Administration in 2020. Forty-nine byways in 28 states were successful in receiving designations, including 34 National Scenic Byways and 15 All-American Roads, according to the U.S. Department of Transportation. The U.S. DOT took into account evidence of intrinsic quality(s), a demonstration of national or regional significance, the overall visitors’ experience and a demonstration of long-term sustainability.

All newly designated byways will be featured in a commemorative 2021 National Scenic Byways Program Designations Booklet, and will also be added to the America’s Byways website, according to the U.S. DOT.

As part of the application to the Federal Highways Administration, the commission secured letters of support from Citizens United to Protect Maurice River and Its Tributaries, the Edwin B. Forsythe National Wildlife Refuge, the Jacques Cousteau National Estuarine Research Reserve, New Jersey Conservation Foundation, Pinelands Municipal Council, South Jersey Chamber of Commerce, Tuckerton Seaport and Baymen’s Museum, and the U.S. Biosphere Network in the National Park Service, Department of the Interior.

In addition to submitting the application to obtain the National Scenic Byway designation, the commission and the N.J. Department of Transportation have taken several steps to raise awareness and increase usage of the Byway. In October 2020, the Pinelands Commission created a new interactive tool that the public can use to plan excursions on the Byway. In early December, it created and printed 650 copies of a 2021 Pine Barrens Byway-themed wall calendar that features 38 photos of various locations along the Byway route. The calendars were distributed to the public free of charge at three locations in the Pinelands.